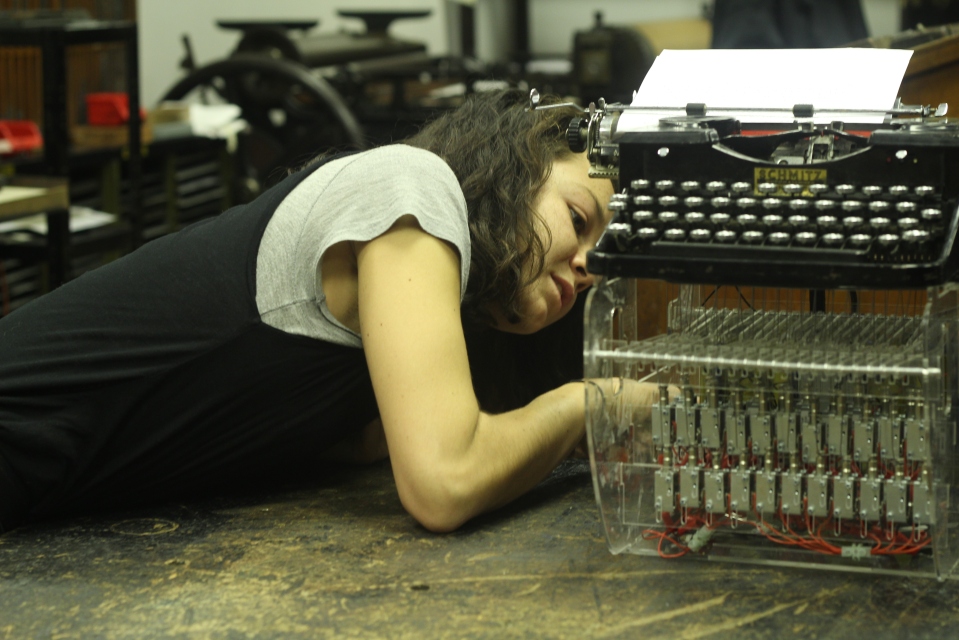 This page shows regular news updates of Platform-7 during 2013

24th November 2013: Silent Cacophony website passes 10,000 pageviews, a first for one of Platform-7’s abstract art events, and over 5,500 pageviews on the Londonist map

22nd November 2013: Poetry and live music in the Hague forest, the launch sites of V-rockets on Britain during WWII [click]

21st November 2013: An incredible amount of blog posts and feedback of the impact of Silent Cacophony

15th November 2013: How a simple misunderstanding brought about by expectation can create potential conflict ”No Cursor on a Manual Typewriter’, Nancy Esposito and Liam Donovan [click]

2nd November 2013: Creator on Silent Cacophony: Yesterday Silent Cacophony demonstrated, for me anyway, how art has the influence to fundamentally change individuals and imbue a sense of empowerment and affect people’s lives and the environment surrounding them. The aftershow gathering was electric, even for all those who were not artists, shared stories of individual artist’s meeting for the first time recounting the same responses; audience and passerbys who engaged reacting deeply in very similar fashion. Many 100s observed and participated with incredible texts of joy beginning to appear early despite the grey, chilly drizzle that fell most of the day. There was a huge amount of emotion going on throughout the events, and I found myself choked up at one point during my little ‘thank you’ last night. There are too many to mention, and too many impacted to say any name without missing off someone, so please take this an individual thank you to everyone who took part, helped, spread the word and generally made the event the experience it was. Loads of images, comments, blog post are coming in already, which will all be posted up over coming week, but I thought I would start with this brilliant brilliant short film away from bustling London. Filmed in East Sussex it really captures the idea of Silent Cacophony and its abstract nature in making people think about the world constructed around them. The wet road from the rain exaggerating the sound of the vehicles is fantastic. Thank You – John Mc x

8th November 2013: Westminster City Council have pulled out the stops to allow Daniel Jack McClennan film to be projected onto Tate Britain and big up to Chelsea Collage of Arts for allowing us to use their building as a base for the projector FROM 4.30pm [click]

7th November 2013: Very innovative intervention in Bloomsbury by artist Rhiannon Armstrong and SHM-Productions. Footsteps on the pavement in Bedford Row mirror a journey taken by a silent Zeppelin airship and its crew on the night of 8th September 1915, when over 40 bombs were dropped on the Bloomsbury area, killing 26 people. It is on a scale of 1:125 and reoriented by 90 degrees. Each footstep corresponds to one of the bombs dropped, and the location it was dropped in [click to read more].

6th November 2013: This was not a direct war tragedy but one caused by the fear war instils, the crush at Bethnal Green Tube [click]

25th October 2013: Poster and Flyers sent to printers, should begin appearing from

24th October 2013: Southeastern are not only allowing the use of Greenwich train station by Camille Desmarestand Garry Scott James dance performance for Silent Cacophony but plan to promote it as well – Sunday and Monday times various:http://www.silentcacophony.co.uk/#!GreenwichC-DesmarestGarry-James/zoom/c13du/image1eq1

22nd October 2013: confirmed details of over 30 events across London and beyond … http://www.silentcacophony.co.uk/#!event-location-details/c13du

22nd October 2013: Tower Hamlets have been super efficient in ensuring all of the Silent Cacophony events happening the borough have correct permissions

16th October 2013: Camden libraries excited by Terry Duffy’s “mini monuments” in Holborn and asked whether something could take place in Swiss Cottage library? So they will get the Royal Central School of Speech and Drama MA Music Theatre’s “4.33” performance!

16th July 2013: Really enthusiastic artist meeting at Made in Greenwich who are coordinating Greenwich aspect of Silent Cacophony http://www.madeingreenwich.co.uk/

7th June 2013: Royal Central School of Speech and Drama and Platform-7 to partner on ‘Silent Cacophony’

21st May 2013: First public washing of tights on the street in Catford Broadway warmly received by locals with many engaging and recounting stories of tights and their alternative uses [click]

10th May 2013: AHRC Creativeworks London award Platform-7 and King’s College London funding to codify the company’s collaborative practices. Andy Pratt, Professor of Culture, Media and Economy, Director of Culture, Media and Creative Industries Dept and his team will look back at Platform-7’s working methods and follow projects over the summer to better understand creative collaboration

10th May 2013: An insight into a key influence behind Platform-7 [click to read advertising giant Dave Trott]

8th May 2013: Re-imagining Ladies Tights officially with incredible reaction across Lewisham. Recycle bags available at Goldsmiths, Lesoco, Lewisham council offices, and age UK in Catford where we will be running a series of workshops

13th April 2013: New essay update on Margate 2-years on from the Moonbow Jakes intervention in 2011 [click]

8th April 2013: Arts Council Funding for the collaboration with Akleriah [click] to return to the disused Blockbuster in Catford for a new project ‘Re-imagining Ladies Tights’ exploring the politics around tights and stockings [click]

4th April 2013: Platform-7 has submitted joint application with Goldsmiths Sociology dept to AHRC Creativeworks London ‘Entrepreneur-in-Residence’ scheme to fund the company advising the UrbanFotoFest team and facilitating managed growth during 2013. Partners include Tate Britain, British Library and many others

19th March 2013: Professor Andy Pratt, Director, Culture, Media and Creative Industries, Kings College London agrees to a joint application for Creativeworks London, Localities and Creative Industry to better understand the concealed bonds that are required for there to be ‘a sense of community’ and devise practice ways of describing and explaining them. We aim to formalise Platform 7’s practice in academic terms, and to examine how academic ideas can be translated into Platform 7’s practice.

8th March 2013: Essay ‘Was it worth it?’ by John McKiernan asks whether live performance events like ‘no man’s land are worth the effort [click to read]

4th March 2013: Opportunity to use the disused Eurostar terminal again at Waterloo

11th February 2013: Queen Mary University of London pledge support for our bid for poetry around the Olympic Park

7th February 2013: Got our first institutional support for LLDC poetry bid in writing “I would like to offer a strong offer of support for your proposed [poetry] project. As a Reader in Creative Writing and the module co-ordinator for performance poetry at Bath Spa University” http://www.lucyenglish.com/

6th February 2013: Getting great interest from potential partners and many collaborators